WEST ORANGE, NJ – The West Orange High School Girls Wrestling team is making history at the high school and in New Jersey as part of a new national and worldwide movement acknowledging girls wrestling as a sport in its own right.

At least 15 states have approved girls wrestling as a sport beginning in 2019, including New Jersey (New Jersey was the twelfth state to approve.) The state is well-known for how seriously it takes the sport, featuring detailed sports coverage, camps, tournaments, clubs, and more.

Previously, girls were allowed to wrestle on coed teams. They still can, but as schools begin to build a full-size girls team (enough members to compete in each weight class) it is expected that girls will choose to play other females, especially at the higher weight classes.

“Once you get over 132 pounds, it gets hard to wrestle boys,” said senior Sandy Guerrero (who wrestles girls at 215 pounds). “It’s like wrestling men,” she laughed.

Until there are enough full-size teams for competition, girls wrestling tournaments remain individual in nature, meaning that there are no official team placements/scores.

Building Girls Wrestling teams across the state is a process, but with the success of its inaugural 2019 season, it is growing quickly. The WOHS team started with seven girls last year and is up to 20 this year.

The program at WOHS has expanded mostly by recruitment and word-of-mouth. Several girls had played other sports, like track and soccer, but liked the idea of doing something new and different.

“At first I just liked the idea that there were no tryouts,” said sophomore Esther Gratia, “but it turned out to be so much more disciplined and serious. Practices are different from middle school – they’re aggressive and you practice to win. It’s a different mindset and a different culture.”

For junior Elicia Kimble, wrestling offered something physical and demanding.

“I have seven brothers and three sisters,” she said, “and things are always physical around my house. I wanted to get stronger and hold my own.”

From the beginning, West Orange wrestlers Sandy Guerrero and Daniela Tacuri were incredibly successful, winning several championships in their weight classes, with Tacuri placing second and Guererro placing fourth in the state at Atlantic City in February, 2019.

Both girls are on track for another shot this year, along with sophomore Esther Gratia. All three qualified on Jan. 11 to move forward -  Daniela Tacuri was a 6-5 winner at 114 and Sandra Guerrero pinned her way to the championship at 215 pounds. Esther Gratia (180) was a runner-up.

Guerrero has wrestled for 10 years, first with the West Orange Rec program, then middle school, and at West Orange High School. She also participates in club wrestling. Her parents own a Martial Arts studio and she is also adept in jiu jitsu.

“I wanted to do something besides martial arts,” she noted, “and I liked the idea of wrestling.”

She hopes to continue her wrestling career at New Jersey City University or East Stroudsburg, where they have women's wrestling programs.

“Wrestling is hard, but it’s fun,” said sophomore Allison Brizuela, “and there’s nothing like the feeling you get after your first win.”

For this reason, serious wrestlers are encouraged to join clubs where they can learn Greco-Roman and Freestyle wrestling, practiced at the Olympics and other parts of the world. Women's wrestling was first approved as an Olympic sport in 2004 and is now considered the reason for wrestling’s renewed interest.

At West Orange High School, the Girls and Boys Wrestling teams are considered as a whole. They practice six days a week, Monday-Saturday, unless they have a match/tournament. The coaches for the girls and boys wrestling team are Head Coach Steve Zichella, Joe Spina, Jeff Mazurek, Mike Spagnola, Vin Cardasco, and Eddie Beielgian.

The same sense of community so well-known to the boys’ team has developed with the girls.

“I’ve never had actual girl friends until this year with wrestling,” added Kimble, followed by hugs from fellow team members.

With only four tournaments a season, the girls are hoping for more matches with local teams. To date, most of the rapid development in girls wrestling has been in South Jersey.

“I’m proud to be part of history and in establishing girls wrestling,” concluded Guerrero, “and I’m excited to see where it goes from here.” 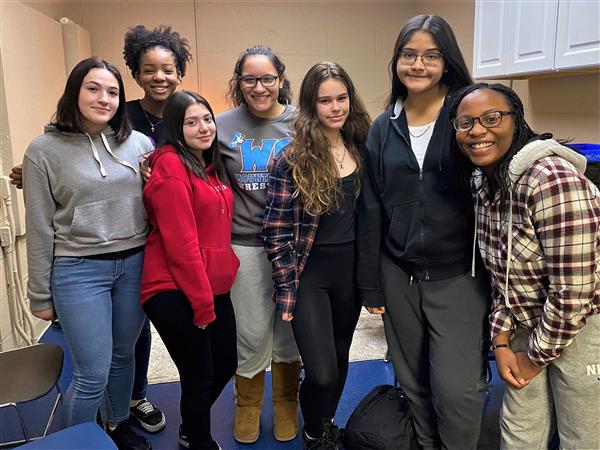