West Orange, NJ - The award-winning West Orange High School JRAFROTC Mountaineer Squadron hosted a Drill Competition on Nov. 23 that included hundreds of cadets from across the tri-state area in friendly competition.
12 schools participated in 15 different events throughout the day, including armed and unarmed Color Guards, drills, inspections, exhibitions, and even academic testing.
The overall Unarmed champion (that is, the school that did the best in all events that do NOT use rifles) was Atlantic County Institute of Technology from Mays Landing, NJ. The Armed champion (the school that did the best in all events that DO use rifles) was Louis E. Dieruff of Allentown, PA.
As hosts of the event, West Orange did not participate in the competition.
"This is an Air Force Junior ROTC Drill Competition," began WOHS Major Joseph Marchesini (Ret.)
"During this competition, AFJROTC units from New York, New Jersey, and Pennsylvania came together to compete in various military marching, fitness and academic events. Competitions like this allow units to test the skills and training they've learned at their home units against others in their region. Regional winners often go on to national competitions," he continued.
"This is the second time we are hosting (the first event was in April). Cadets in the Mountaineer Squadron planned and organized the entire event," he noted.
See all the photos from the competition here.
Cadet Perreira leads the Mountaineer Squadron in a cheer. 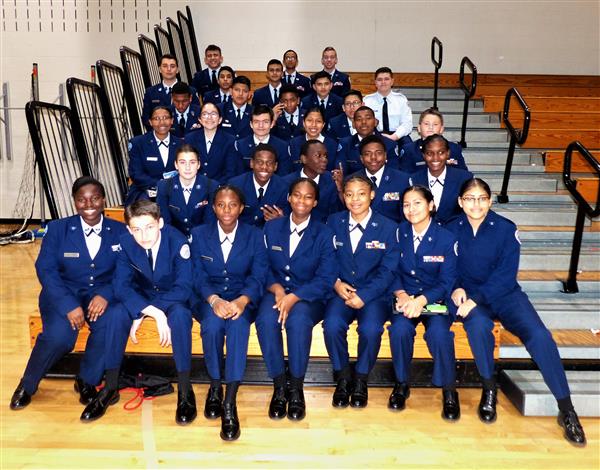