"The Seal of Biliteracy is an award granted by a school, district, organization, or state in the United States of America, "In recognition of students who have studied and attained proficiency in two or more languages by high school graduation," according to the website.

To qualify, a student must be able to speak, read, listen, and write in two or more languages at a high level of proficiency. In order to be eligible for the Seal of Biliteracy, students needed to demonstrate a proficiency level of Intermediate Mid in a World Language and meet State high school graduation requirements in English as measured by State ELA assessments or its alternatives.

The students who received the Seal of Biliteracy from the NJDOE will receive a certificate signed by the governor as well as an insignia affixed to their transcript. This award generated a high level of student motivation in both the World Language and ESL departments to increase their proficiency levels and will serve them well in their future endeavors.

In 2016, the State of New Jersey became the fifteenth state in the nation to implement a legislated statewide Seal of Biliteracy. 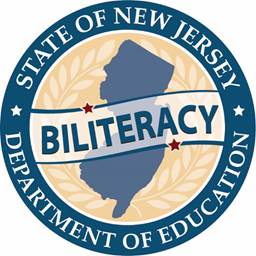