WEST ORANGE, NJ - The annual Veteran's Day Ceremony held by the West Orange High School AFJROTC on Nov. 15 was dedicated to the memory of Class of 2015 alumnus and West Point Cadet Christopher ("CJ") Morgan, who was killed in a training exercise on June 6, 2019.

Morgan's death deeply impacted the West Orange community, who celebrated his life at a memorial service on June 11. While at WOHS, Morgan was a standout football player and star wrestler who went on to be named fifth in the state at the wrestling finals in Atlantic City.

He attended West Point Military Academy for one year and then moved on to West Point, where he was set to graduate in 2020. He continued his wrestling career there as well.

Most importantly, Morgan was described as a "kind and caring person who lit up the room the moment he walked in."

The AFJROTC presented the colors and performed the flag folding ceremony, presenting the flag to Morgan's parents, April and Chris Sr. Chase Morgan, sister of Chris Jr. and a member of the AFJROTC participated in the ceremony as well as the Battlefield Cross ceremony.

According to Wikipedia, "The Fallen Soldier Battle Cross, Battlefield Cross or Battle Cross is a symbolic replacement of a cross, or marker appropriate to an individual service member's religion, on the battlefield or at the base camp for a soldier who has been killed. It is made up of the soldier's rifle stuck into the ground or into the soldier's boots, with a helmet on top. Dog tags are sometimes placed on the rifle, and the boots of the fallen soldier can be placed next to the rifle. The purpose is to show honor and respect for the fallen at the battle site. Today, it is a means of showing respect for those that have died amongst the members of the troop."

Following the moving ceremony, the items were placed in a large display case at the high school in CJ's honor. It also includes his uniforms, photos, and mementos.

To date, the newly-formed Christopher Morgan Foundation and the West Orange Scholarship Fund have raised approximately $100,000 to establish a permanent endowment for CJ. Beginning in 2020 a yearly scholarship in his name will be given to a graduating student from West Orange High School.

See all the photos from the WOHS Jr. AFROTC Veteran's Day Ceremony here. 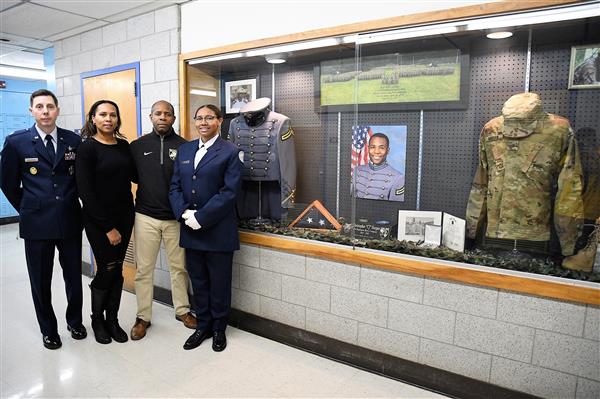 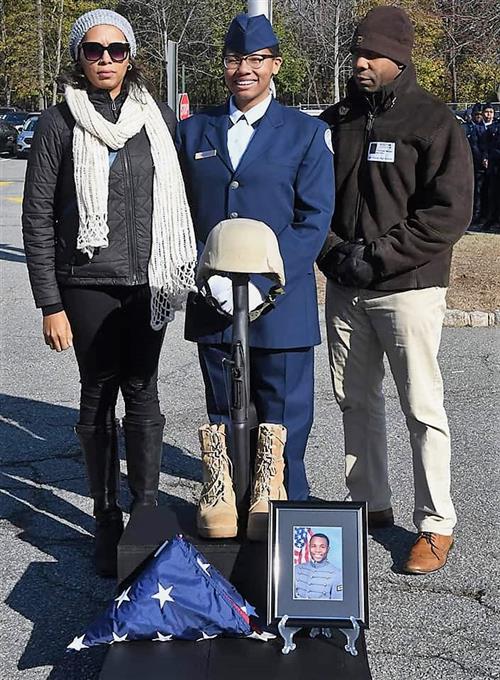