The Mountaineers Win Big Over Barringer, 52-21, for Verducci Brothers on Senior Night

WEST ORANGE, NJ -- West Orange High School took the win over Barringer, 52-21, during their Senior Night game on Nov. 1, and dedicated it to two of their own.

Tragedy struck the heart of the West Orange community on Oct. 27 when West Orange High School students Larry and Michael Verducci were involved in a dangerous car crash. The young men are currently in critical condition at Morristown Memorial Hospital fighting for their lives.

Both Verducci brothers have had a tremendous impact on the community in which they reside. Larry is also a member of the Mountaineer football squad. His teammates refused to leave the brothers behind and elected to dedicate the final games of the season to both Larry and his brother and Michael. The team put a brand new chip on its shoulder in the form of the Verducci brothers, and Larry and Michael very quickly became the heartbeat of this young, talented team. 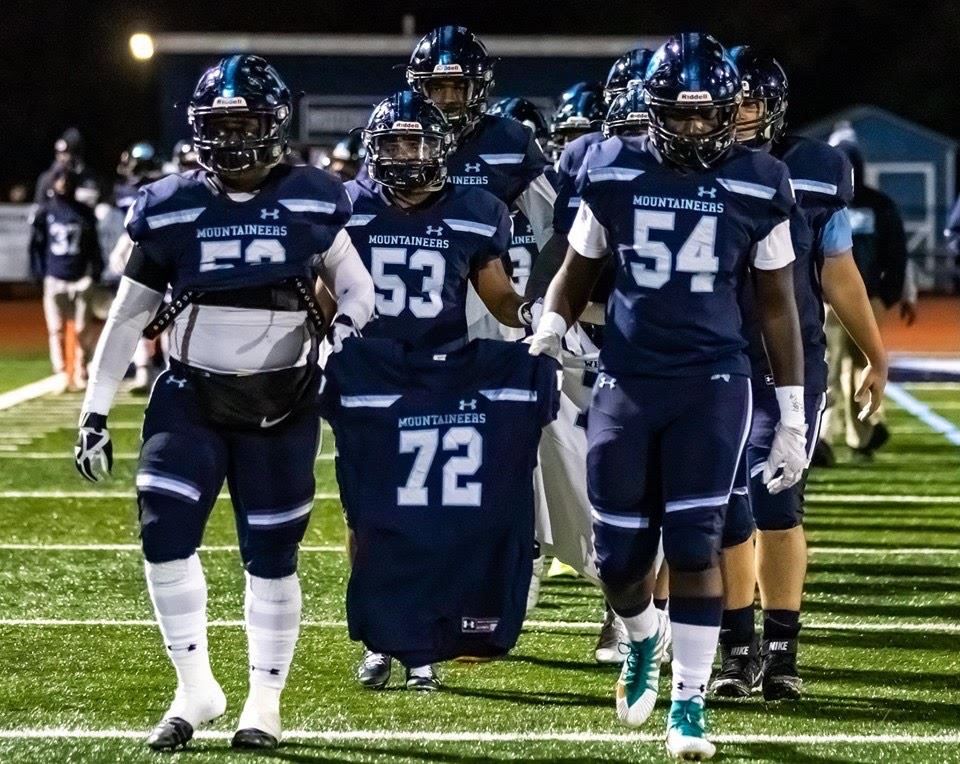 Photo Credits to Larry Washington: #52 Amadu Kamara and #54 Calvin Nwosu, carry out Larry Verducci’s #72 jersey as the team rallies around their brother who is fighting for his life.

Posting an impressive 5-3 record up until their Nov. 1 game against the Barringer Blue Bears, the Mountaineers looked for their third home win of the year at Suriano Field and a repeat of their 2018 14-6 victory. The Mountaineer defense, who had been stout all season, would need to stop Barringer’s quarterback, #5 Corey Walker, who has multiple D1 offers in just his junior year of high school. 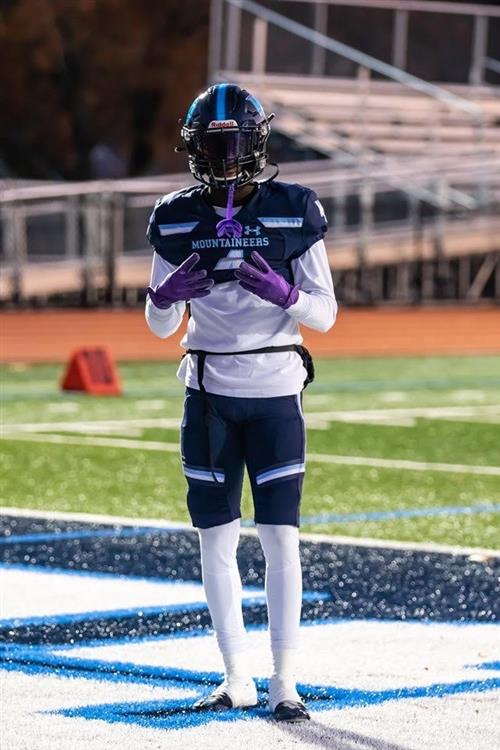 #3 Shakhi Carson burst out of the backfield for seven yards and crossed the goal line on his feet, putting his team ahead 6-0. A faulty snap on the part of the Mountaineer special teams unit failed on PAT.  For the third straight week, the West Orange offense had opened up the game with a touchdown when first setting foot on the field,  doing so against Bloomfield High School a week prior, and the Passaic County Technical Institute (PCTI) during their week seven match-up against the Bulldogs.

The Blue Bears quickly responded with a touchdown of their own, as Barringer quarterback #5 Corey Walker took a play-action run into the end zone on a fourth and one gamble.

Head Coach Ronly London elected to take a chance on a fourth-down attempt, putting trust in his offensive unit, who would ultimately come through with a score. A successful PAT attempt by the Blue Bear kicker put Barringer ahead in the score column, as the score stretched to 7-6. The following West Orange possession resulted in a lead-shifting touchdown as 6’3, 185-pound receiver, #8 Jayson Raines, showed his vertical skills as he went up and grabbed a 6-point score for the Mountaineer offense. 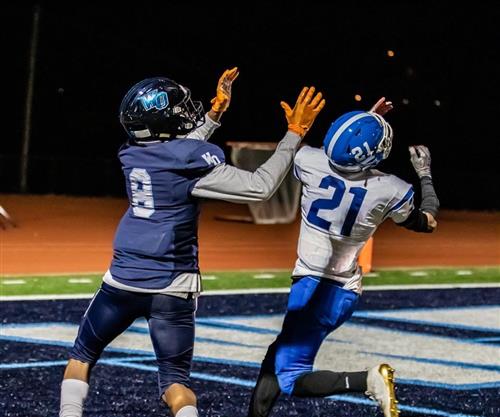 Photo Credits to Larry Washington: #8 Jayson Raines just moments before going up to grab 6 points for the Mountaineers.

Barringer failed to get anything going on their next drive, and would be forced to punt it into the hands of West Orange’s return man, #27 Aidan Healey. Healey gained no yards, but the Mountaineers were granted great field position as the ball was marked down at the Blue Bear 46-yard line. The Mountaineers made quick work of their fifth game possession in Blue Bear territory.

Quarterback #11 Mason Murdock heaved a pass to Raines, his most targeted receiver, who reached up over a defender for another six points. Kicker Bryan Reitberger put a successful PAT through the uprights, with a 19-7 score.

The following Barringer drive ended in a turnover on downs, as Blue Bear Head Coach Ronly London dropped to a 50 percent success rate on fourth down attempts during this contest. Head Coach Darnell Grant and the Mountaineers answered with another touchdown as Raines scored his third TD in the first half. The score was 25-7 heading into the locker room at the half.

The second half continued to favor the Mountaineers, who put up another 27 points and held the Blue Bears to 14. The West Orange second half scoring plays consisted of a 70 yard dump off touchdown pass from Mason Murdock to breakout running back, #25 Makhi Green, a 17 yard touchdown rush by senior running back Michael Charles #6 for his first touchdown of the season, a touchdown pass on the brink of the goal line from Murdock to #4 Amiyn Hanks, Jayson Raines’ third touchdown pass that went for 18 yards and six points, and a kickoff that returned 80 yards for a touchdown by Green. The West Orange defensive unit had been stout, holding the Blue Bears scoreless on five of their seven total second-half possessions.

Mountaineer quarterback Mason Murdock finished his spectacular day with five touchdowns, 305 passing yards, and a completion percentage of 80.9 percent (17-21). Jayson Raines had eight total receptions for a booming 157 yards and three touchdowns, while Amiyn Hanks received four passes for 83 yards and one touchdown. In the run game, starting running back Shakhi Carson ran the ball eight times for 108 yards and one touchdown, while Mekhi Green scored two total touchdowns, including a 70 yard touchdown pass and an 80 yard kickoff return to the endzone, and Michael Charles trotted into the endzone for a 17 yard score, and ran for over 55 yards. On the defensive side, #31 Adonis May led the team in tackles, racking up 14, and junior captain #14 Chris Parsons generated a turnover in the game, which later translated into a touchdown. 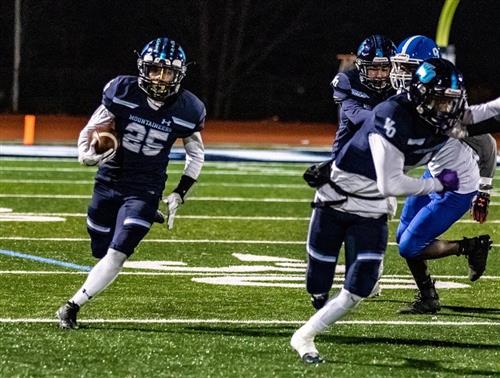 Photo Credits to Larry Washington: Running back Makhi Green #25 scores an explosive touchdown in the late goings of the match-up. 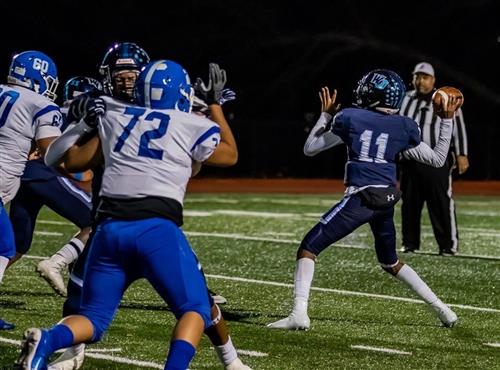 Photo Credits to Larry Washington: #11 Mason Murdock zones in on a pass.

The Mountaineers had not only made their town proud, but they had made the Verducci family ecstatic and had won for their teammate Larry and his brother Michael. The win against Barringer stood for more than just another step towards the playoffs. It stood for the brotherhood that is the Mountaineer football team, and it stood for the grand family that is the West Orange community.

A Go Fund Me page has been set up to help the Verducci family here.

Welcome the newest member of the Mountaineer Media team, Mark Mincolelli. Look for articles throughout the year.