WEST ORANGE, NJ – As of 10:30 am on Nov. 16, all students stranded at schools due to the winter storm that dumped seven inches of snow on West Orange in a matter of hours, were home.

West Orange was one of the hardest areas hit in Essex County due to accidents on the Garden State Parkway and I-280 near township exits. With limited entry and exit points, gridlock closed most main roads in town, stranding motorists and buses and turning 15-minute commutes into 10-hour ones.

West Orange school buses typically do three runs in the afternoon, starting with the high school. Since many of those buses were stuck on closed roadways (Eagle Rock Avenue, Prospect Avenue, and Pleasant Valley Way were closed, to name a few) they were unable to pick up middle and elementary students.

Faculty and staff remained at the schools to prepare dinner, provide snacks, and make the children were cared for. Students played games, watched movies, read, played basketball, worked on computers, and more throughout the evening.

Parents in close proximity to schools walked in with extra blankets, pillows, and other supplies. Other parents took their children and friends to their homes. It took a village, but the children were safe and happy.

At 5:00 am, transportation began calling drivers in to prepare to transport students home. Parents were contacted after secondary roads were cleared regarding anticipated departure and arrival times. Throughout the evening, parents able to pick up their children did so and were also able to pick them up in the morning.

According to Acting Superintendent Eveny de Mendez, “The District Administration is preparing to debrief the details around yesterday's storm in collaboration with our Township and will be preparing to present our findings at the upcoming Board of Education meeting. We thank our students, staff and township personnel for the immense amount of support and dedication given to ensuring the safety and well-being of our students.”

Board of Education President Ron Charles released the following statement:

"On behalf of the West Orange Board of Education we want to extend our sincere thanks and gratitude to the teachers, administrators and staff of the West Orange School District who demonstrated during yesterday's emergency and over the last twenty-four hours how dedicated, professional, and caring they are towards the students of the District. The Board greatly appreciates the sacrifices made on our children’s behalf, as we realize our staff were away from their own families during this emergency.

We further want to extend our gratitude to the West Orange Police Officers, West Orange Firemen and first responders who protected our students and provided safety in extremely difficult circumstances.  We thank the Chit Chat Diner for providing shelter, warmth and meals to approximately 80 children and to the countless community members and parents who provided blankets and supplies. Lastly, to our fellow parents for their patience and understanding during this difficult time.

The Board and the district’s administration have begun the review/debriefing process  which is standard protocol of any significant incident, to provide the district  with an opportunity to review the effectiveness of district’s actions and procedures during an actual incident, including the overall quality of our services to the community and safety for everyone. This review will be invaluable in improving the district’s performance at future incident operations.

Once again, on behalf of my colleagues, I thank you for showing us the heroes you all truly are."

The next Board of Education meeting will be held on Nov. 20 in the Library Media Center of West Orange High School. Public session will begin at 8:00 pm. 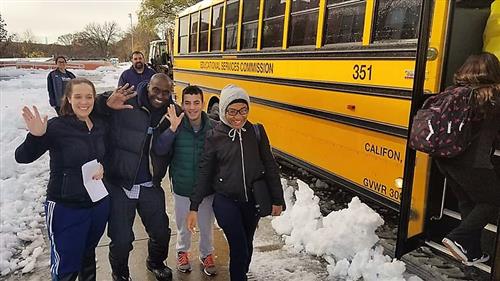 The last busload of students pulls out of West Orange High School this morning. With Principal Hayden Moore and teacher Catherine Connors.