As part of their Social Studies unit, the class was divided into Patriots and Loyalist groups. Stefanelli challenged the groups to research their positions thoroughly, provide evidence-basedl information to support it, present opening and closing arguments, and create poster displays. were graded on organization, clarity, facts, presentation style, and listening.

"The debate consisted of opening arguments on both sides, three pro and three con statements, a poster display, and closing arguments. The students  prepared their facts and research using a multimedia approach from numerous sources. In addition, the children used the writing process effectively to write their persuasive speeches," began Stefanelli.

Patriots argued that there should be no taxation without representation and that imposition of the Stamp and Quartering acts (along with others) to pay off England’s debt was unfair. Loyalists viewed King George as a benevolent king providing services and protection. Patriots desired freedom and independence, while the Loyalists wanted to remain under British rule.

"All the information discussed was taught throughout the unit and the children showed an unbelievable sense of curiosity to learn more about how the nation was created," stated Stefanelli.

Despite the seriousness of the research, students presented their arguments in passionate and humorous ways. The sight of Stefanelli dressed and acting like King George III added to the lighthearted fun.

"There was also  Q-and-A session and trivia game, with parents vs. students," Stefanelli added. " I liked playing and dressing up like King George because it gives the children a fun way to learn about the American Revolution and it will probably be a memory for the rest of their lives."

Although the final vote supported the patriot view, it wasn’t easy to decide which side had the more compelling argument. Principal Tim Beamont, who hails from Wales, was disappointed.

"I have to support the crown," he noted.

See all the photos from the debate here. 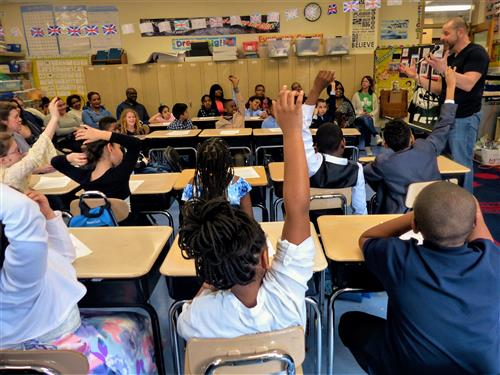 Students prepare to begin the debate. 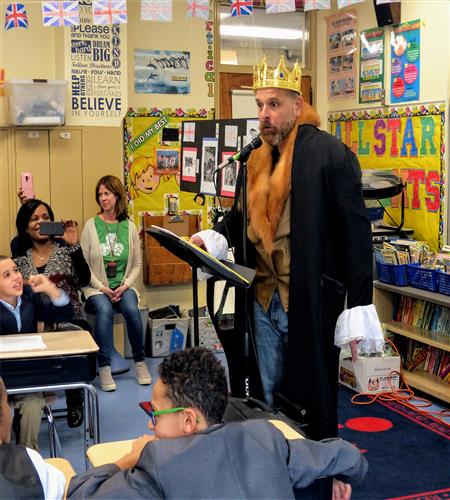