Cadets committing to the prep school spend one year honing their academic and athletic skills and then enter the military academy.

"Before I could remember, the military has been a big influence in my life," Roberson began.

"My mother was in the Army for eleven years and has been serving in the Air Force for nine years. She is the reason for my strict upbringing and has been the motivating force behind me in this process," he explained.

"At six years old, I told my mother I wanted to go to West Point and she simply took it as a joke, as I was only a child with no clue of the hard work and determination that was needed to achieve that goal. As time progressed, it became clear to her and myself, that I did indeed have the determination and work ethic to do so," he continued.

"In my junior year at West Orange High School, my mother signed me up for Air Force JROTC. It was not something I necessarily wanted to do, but I did it without hesitation."

While Roberson at first felt he wanted to join the Air Force, his mind changed after attending West Point's Summer Leaders Experience.

"I was very impressed by the camaraderie and leadership. There I learned that I had to work well with other groups, have perseverance, be able to maintain my academic and social responsibilities, and more. I willingly accepted and worked to achieve all of these things, wanting to be the best leader I can," he noted.

In addition to his participation in the ROTC, Roberson plays football and lacrosse. He plans to major in engineering psychology at West Point.

"Attending the United States Military Academy is not supposed to be easy and yet it produces some of the greatest leaders the world has ever seen. It provides you with the knowledge you need to be a moral individual and a leader in society. I want to acquire the skills that many before me have, in hopes that one day I can use them, on active duty or not, to better the life of someone else. To me it is more than the rank; this is something that is going to impact the rest of my life," Roberson concluded. 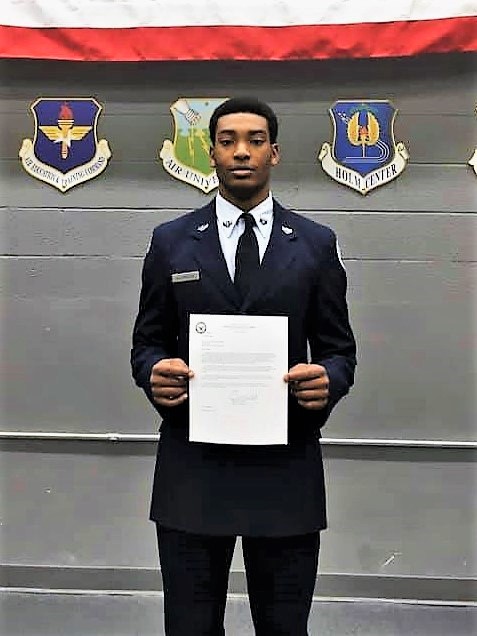